Las Fallas: The fire of Valencia 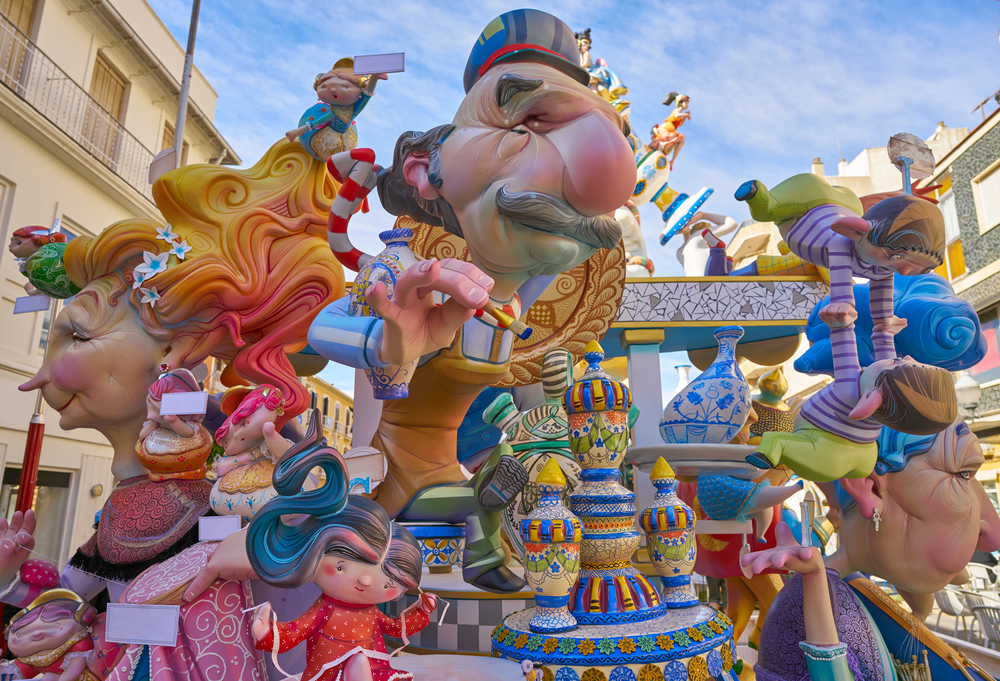 Whether you are living in Valencia or visiting it in the near future, you ought to know that in a few weeks’ time we will celebrate the Fallas, a festival which in 2016 was included on UNESCO’s list of the world’s Intangible Cultural Heritage properties. The Fallas are original, unique and extremely lively, and it does not matter if you are Valencian or are from abroad, you can enjoy them anyway.

The origin of this festival appears to lie in a medieval carpenters’ tradition, every 19th of March, of celebrating the arrival of spring by burning all the leftover pieces of wood they had been using during the winter, including the wooden planks used to place their oil lamps on, no longer needed now with the lengthening days of the changing season. Over time they also started to burn old rags and other bits of junk. Eventually these became the ‘ninots’, unique works of art that convey an ironic and critical meaning.

More recently, the Fallas has undergone an extensive redevelopment and is now made up of several distinct events: la Mascletà, la Plantà, the awards ceremony, fireworks and ‘Nit del Foc’, the offering of flowers to the Virgin of Desamparats, and la Cremà.

Moreover, this festival has other idiosyncrasies that make it very special: most of the streets are pedestrianized for the duration and are constantly buzzing with activity, the sharp smell of gunpowder from the firecrackers is inescapable, and you can eat the traditional sweet fritters with chocolate almost everywhere.

You can immerse yourself in the thunderous pleasures of the ‘Mascletà’ in the Plaza del Ayuntamiento at 14:00 on any day from the 1st to the 19th of March. Every day there the pyrotecnics team creates a spectacular gunpowder performance by launching what seems like a ton of firecrackers into the sky. But be aware that for safety’s sake you should keep your mouth open during the show, because the noise level can reach 120 decibels. It can be a very impressive experience the first time you hear it!

Construction of all the ‘fallas’ monuments must be completed by the morning of the 16th of March, so the ‘falleros’ will usually continue working furiously all through the night before to ensure everything is properly finished and ready for the first day of Fallas. Also, on this day the jury decides the best ‘fallas’ monuments and chooses the ‘ninot indultat’ (the one figure, generally in human form with particularly remarkable features and made from combustible materials, which is saved from the final night’s grand fires of the Cremà).

The offering of flowers to the Virgin starts from 16.00 on the 17th and continues throughout the night as the ‘falleros y falleras’, carrying their floral offerings to the goddess, parade through the city streets, all converging on the Plaza de la Virgen. There, the floral bouquets form a beautiful tapestry of 15 metres in height completely covering the bodily structure of the great ‘statue’ erected to venerate the ‘Virgen de los Desamparados’.

Light, sound and color invades the Valencian sky during these nights with the impressive Fireworks which are usually launched at 12.00 midnight from the Paseo de la Alameda. The ‘Nit del Foc’ is the most spectacular and you will be able to enjoy it on the night of 18th of March.

‘La Cremà’ is the final, closing event when the Fallas figures (or monuments) are burnt and reduced to ashes. Although it is a bit of a pity that is their ultimate fate, but anyway… The kids’ monuments are burnt at around 10.00, and the larger ones at 12,00, except the First Prize-winning monument which is eventually itself devoured by the fire at around 12:30 AM.

The Fallas are finally finished when the monument in Ayuntamiento square is burnt at 1:00h.
Now that you know a little bit about this unique Valencian festival you can visit us and enjoy them. Moreover, you can take advantage of this trip to improve your Spanish at Interland School of Languages in Valencia.